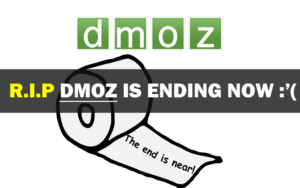 DMOZ – The Open Directory Project which utilizes human editors in order to organize websites is currently closing down and with this, it marks the end of time when humans tried to organize the web. This shocking announcement came through a notice w

hich visitors noticed on the home page of the DMOZ website which said that it would close on 14th March, 2017.

A little bit of information on DMOZ

DMOZ was founded in the year 1998 in the month of June and it was first given the name of GnuHoo and then it was immediately changed to NewHoo. It was introduced with the intention of making it a rival of Yahoo Directory at that time. Yahoo was a search engine giant at that point of time and it faced too many controversies for being extremely powerful and extremely difficult for the websites to earn a listing.

Thereafter, NewHoo as acquired by the company Netscape in 1998 November and it was then renamed Netscape Open Directory. Later on in that same month, AOL acquired Netscape thereby getting control on the Open Directory. So, there were literally a string of acquisitions which had to be dealt with by DMOZ.

In the same year, Google was born and this marked the end of human curation of websites. Google indeed bought the power of the ability to search each and every page on the web with 100% relevancy which was the hallmark of human-powered directories. Yahoo then chose to prefer results generated by machines over humans, thereby shoving its directory at the back of the scenes until later when its winding down was announced in the month of September, 2014. However, the actual closure came down in 2014 December as the old websites were entirely unresponsive.

Although researchers and marketers almost forgot the presence of DMOZ, it still kept up with its work and it rather took too long to close down their business in spite of going through too many acquisitions. Nevertheless, analysts say that DMOZ will keep living in a unique way, through the NOODP meta tag. This was actually a way for the publishers to inform Google and other search engines to not describe their webpages by utilizing Open Directory descriptions. Although the tag becomes redundant, it still keeps lurking in the web pages which will keep using it in years to come.

How To Increase Sales Via Webinars? Few Insider Tips

Is Your Business Using all of the Right Tools to get the Job Done?